Daikin Saudi Arabia has launched the 4th Generation of VRV for High ambient temperatures to the market. Launch Event was attended by more than 300 key consultants, Developers, Distributors & Industry professionals from across the KSA, and was held at several cities across the kingdom such as Riyadh, Khobar, Jeddah and Al Madinah

Mr. Stefaan Segers, Consulting Sales Team Leader at Daikin Saudi Arabia said: "From my point of view the new VRV IV is now fully adapted to the harsh environment of the Saudi market, the reliability is massively improved based on the refrigerant cooled PCB, the protection layers on the electronic boards, and the special PE coating on the coil. On top with the adding the VRT technology to the VRV IV, we are now already prepared for future regulation demands on seasonal efficiency showing our commitment towards the region"

The system has an option to integrate through “Intelligent Network”, a predictive and preventive maintenance. The system that operates by remotely monitoring the operation of the major components and detects any deviation from the norm, as a potential future failure, and hence sends a message to the service responsible, to take care of the problem before it happens.

The VRV IV core technologies result from over 50 patents related to the Compressor, Condenser Coil, and amongst all; the Refrigerant –Cooled PCB which adds reliability at the high ambient temperatures in the GCC. 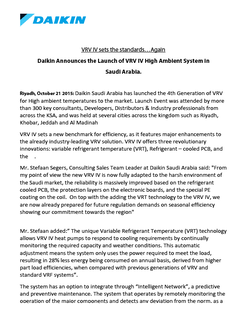 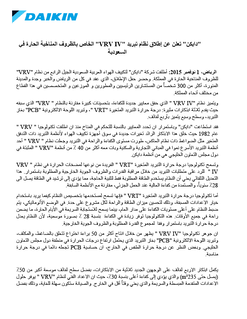