The chemical name for R-32 is difluoromethane. It is already used for many years as a component of the refrigerant blend R-410 (50% R-32 and 50% R-125). Daikin and other industry players recognize today that there are several advantages of using R-32 in its pure form instead of R-410 or other types of blends. It is considered the most balanced next generation refrigerant for residential and commercial air conditioners, cooling and heat pump systems.

Compared to the refrigerant R-410A, the Global Warming potential of R-32 is only one third (GWP is 675 for R-32 compared to 2,088 for R-410A), while it allows for a much smaller refrigerant volume or higher energy efficiency. As a single component refrigerant, R-32 is also easier to recycle and reuse, which is another environmental bonus. In addition, R-32 is easy to handle for installers and service technicians as it can be charged in both liquid and gas phase and working pressures are similar to R-410A. There is also no need to worry about fractionation or glide problems as R-32 is not a blend refrigerant.

One of the important features of refrigerants is their heat transfer capacity. R-32 possesses about 1.5 times higher heat transfer capacity than R-410A, which means that its charge volume can be up to 30% smaller, depending on the model design. This in addition to the lower GWP of R-32 results in a strongly reduced potential global warming impact.

The potential global warming impact (GWP x charge volume) can be up to 75% less than that of R-410A. R-32 can improve energy efficiency by 5-10% depending on models.

R-32 is a next generation refrigerant that addresses a range of environmental considerations in a balanced manner.

R-32 is currently being used in about 15 million air conditioning units (estimated May 2016) in more than 40 countries worldwide, including Japan, India, Australia, Thailand and several other Asian, Middle East and European countries. In GCC, more than 10,000 units were sold in Oman and the UAE, as of June 2016. 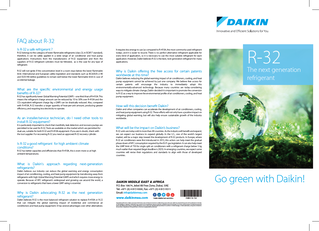 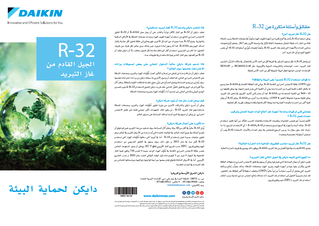 As a market leader, Daikin aims to develop systems that improve indoor comfort levels while having low environmental impact, with energy efficiency and refrigerant choice as key factors. With this vision in mind, Daikin launched the first worldwide air conditioners with R-32 refrigerant in Japan end of 2012 were several millions of units have been installed since.

Meanwhile, R-32 models have also been introduced in other countries such as Australia, New Zealand, India, Thailand, Vietnam, Philippines, Malaysia, and Indonesia and as a first, in Europe, in 2013. In GCC, the first high ambient split units were launched in May 2015.

In 1987, the international community agreed under the Montreal protocol to phase out ozone depleting substances to nearly zero by 2030. As a consequence, the A/C market started to move away from ozone depleting HCFCs refrigerants, such as R-22, towards HFCs.

However, the HFCs conventionally used as alternatives for HCFCs have a high global warming potential (GWP) and as such a negative impact on climate change. As such in recent years, some legal developments have been undertaken in some regions to restrict the use of these substances as well. These actions were followed by an agreement in 2015 by the international community to initiate discussions to include the control of climate change inducing HFCs under the Montreal protocol. As a consequence, today, the A/C market is moving again, now towards refrigerants with a lower GWP.

Ban of ozone depleting substances use on new A/C equipment in Middle East. A limited amount will be allowed until 2040 for servicing existing A/C and refrigeration equipment